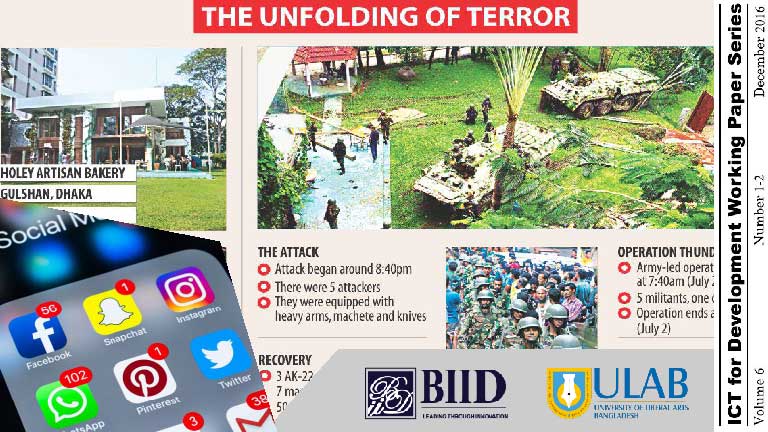 On the night of July 1, 2016, a group of militants entered Holey Artisan Bakery (a restaurant in Gulshan) with crude bombs, machetes, pistols, and took several people hostages. They killed 20 people, most of them were foreigners. There were 6 militants who were educated. They belonged to rich and educated families. The Gulshan café attack created a spark on the social media. This is now an issue of great importance to study social media utilization in this recent attack. We have known the militants used the social media to go for the so-called jihad. Even with the blessings of social media, all of us knew the real names, their family background, and status of the militants. This study aims to investigate. How the attackers used Facebook and Twitter to become militants and how they were recognized through Facebook. Screenshots of different posts of Amak (IS-backed newspaper) were collected from the Twitter account of SITE intelligence. Also, posts of the attackers and the respondents on Facebook and Twitter were collected. content analysis method was used to analyze them. This Study could help the investigators dig deeper into the social media impact of IS and other terror groups and root out the terrorists to make a fine society.

Introduction
New communication technologies like social media have proven to be extremely valuable tools for the terrorist organizations and are perfectly suited for the audience they are intending to target. In this age of technology, terrorism is using social media as a tool for their mischievous activities. Due to convenience, broad reach, availability, and affordability, terrorist group use social media very often. New communication technologies have not only made our life easier, but they have also made it far easier to disseminate the messages of terrorists through images, videos, and other propaganda base activities. The Islamic State is more strategic online, demonstrates greater social media sophistication, and operates in cyberspace on a larger scale and intensity than previous terrorist groups. Its online propaganda is linked with radicalized individuals traveling to fight in Syria and Iraq or committing “lone-wolf” terrorism in the West. Islamic State territorial gains, the influx of foreign fighters, the volume of its online propaganda, and extremist attacks in Paris converged to catalyze more policy action in 2015. ISIS has proven itself to be an especially social media-savvy organization. As Twitter shuts down their accounts, plenty of terrorists have used the site to discuss their mission and connect with other fighters before being ousted. The terrorist group ISIS is known for its sophisticated social media outreach. Now it seems they are bringing that sophistication to their video propaganda too.

ISIS videos include the executions of western aid workers and journalists, Syrian government soldiers, alleged spies, and suspected homosexuals, a Jordanian pilot, Christian migrant workers, and others. Some have been decapitated, others shot, blown up, hurled from tall buildings or burned alive. Many of the clips serve a dual purpose, inspiring one group of people while disgusting and frightening another.
The study has been conducted to show the frequent use of social media in the attack of Holey Artisan Bakery by the terrorists. Even panic is going through the wind because of the post of ISIS. People of Bangladesh also came to know the identification of the terrorists through their Facebook and Twitter accounts. To conduct the research the researcher has used the posts of Twitter and Facebook given by the terrorist’s group, and intelligence agencies. Most of the twitter posts were found through using some hashtags like #dhaka_attack, #amaq, #site_intelligence, #isis etc. In Facebook, the researcher also used the tags but most of the posts were found through the different pages of national and international media, Bangladesh intelligence departments etc.